Warning, I'm about to enter a whole new level of nerdiness!
I  can't remember if I mentioned it here, but this summer I have been completely obsessed with Star Trek. Specifically Star Trek: Into Darkness. I don't know what it is, but I LOVE it! I've seen in multiple times in the theater (I'm too embarrassed to admit how many times! It is at the two dollar theater now so it's gotten worse, ha!) I've also been working my way through Next Generation, and I'm going to tackle the original series next.
I'm especially into Spock, and Vulcans. Partly because Zachary Quinto is so cute (and reminds me of Travis). Partly because I love Spock's struggle with logic vs emotion. During one of my viewings I got an idea for a tattoo, and a couple days later I got it on the side of my leg... 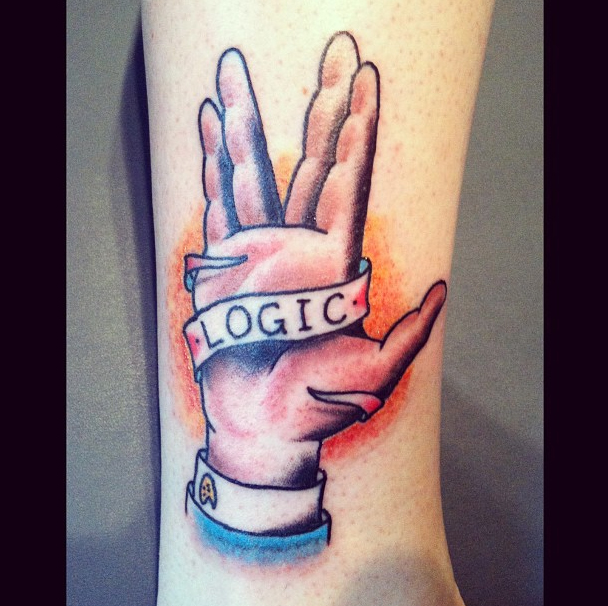 It is a little bloody here, the color around the hand is going to be yellow once it calms down.
It was done by Eli Draughn at Safe House Tattoo. He just started his apprenticeship, this is actually his 25th tattoo, can you believe that? I'm so freaking thrilled with it. He made it even better than I was imagining. And he came up with the cute little insignia button on the cuff. Geeze, I love it more every time I look at it!
If you are in Nashville you should hit him up at http://tattoolawas.blogspot.com/. He is working for tips while he is an apprentice, and you can follow him on instagram and see his progress! I'm so impressed with how great he is already! He is really nice too. I actually met him and his wife at a friend's sister's wedding last summer and we had a great time. They live really close to us, so I'm hoping we will hang out soon. 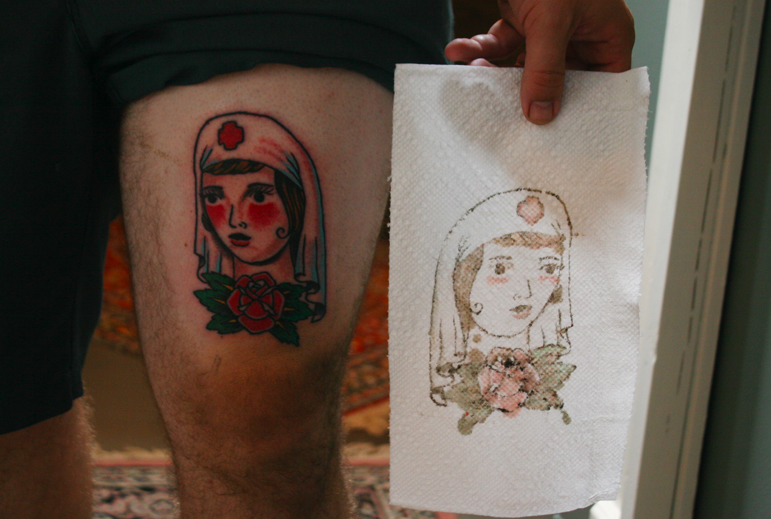 Travis got this from him. He has been talking about getting something Red Cross related for a long time. He collects vintage/antique medical supplies/red cross junk. We were cracking up at how perfect this paper towel looked. This photo was taken the day after he got it too! Gross.