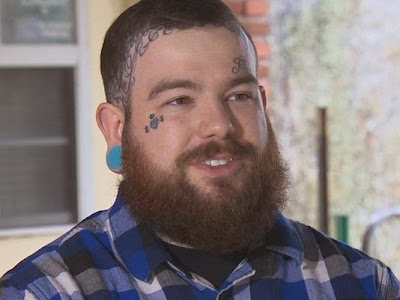 Once again, we have someone surprised that the world does not adjust to their personal choices.

Making the rounds on the news this morning was a story about a man who was denied service at a restaurant because he had facial tattoos. The facts of the story are as follows. Eric Leighton and a friend went into a Houston-area Bombshells Restaurant, after going to a rodeo, to get something to eat. They were seated for less than a minute when they were approached by a police officer. The officer was working as security at this restaurant, which is located in an area that has some issues with gangs. Because of the gang-issues, the restaurant has a policy designed to keep out potential problems, which apparently includes denying service to people with facial tattoos. The officer advised the men of the policy and told them they would have to leave. Leighton and his friend left, and Leighton posted about the issue on Facebook. From there, the story went viral.

The lesson here is one that bares repeating; choices have consequences. As a tattooer, every studio I have worked at refused to do tattoos that are potentially gang-related. The reason for this is simple; as a business we did not wish to cater to the criminal element. We did not want to become the “gang tattoo studio” and have thugs discouraging our other clients from patronizing our business. The tattoo industry has struggled for too long to overcome its less-than-legitimate history.  This is a simple business decision; we don't want to have people in our place of business who may be disruptive or damaging to our profits. We don't want our reputation damaged by association.  It simply is not worth it.

Furthermore, when a client requests a facial tattoo, there is always a conversation about the potential consequences of that decision. That conversation extends beyond just how such a tattoo can impact their employment options. It includes the reality that people may react poorly to the facial tattoo, that having a facial tattoo is making a statement that not everyone will appreciate. Having a facial tattoo means that you accept those consequences and are willing to tolerate the negative reactions that others may have.  When getting a tattoo on your face, you need to be aware that there are some businesses that will not hire you and some venues that will deny you entrance.

This really should come as no surprise.

Choices have consequences. Leighton sounds like a hard-working, upstanding individual, and definitely not a gang-banger. However, he should understand that his choice to have a facial tattoo lumps him in with an element of our society that cultivates a negative reaction. If a business chooses not to cater to that element of our society by making blanket policies regarding dress and appearance, then they cannot differentiate on a case-by-case basis regarding that policy. If red or blue bandannas are not allowed because of their gang-related symbolism, it doesn't matter that you are a sixty year-old cowboy, the policy is that you take off the bandanna if you want to eat at that restaurant. Imagine the outrage that would ensue if it was discovered that a restaurant did try to differentiate between regular tattooed folk and "gang-related" tattooed folk. The fallout would be far worse.

This policy is no different than policies at some restaurants requiring a jacket and tie.  It is no different than some clubs that will not let you in if you are wearing baggy-pants, a baseball cap, or track clothes.  While it is true that clothing can be changed, the choice to get a permanent marking on your face was one made by the individual.  Just as an individual has a right to get a facial tattoo, a business has a right to deny service to someone for aesthetic choices out of concern for the impact it may have on their reputation.

Bombshells is not the only eatery in the area. If they choose not to cater to you, then their choice has a consequence as well. You can go down the street to their competitors. You can choose not to eat in that area. You can tell your friends and encourage them not to eat there. You cannot, however, demand that the business change their policy to cater to you. Leighton is not necessarily making that request, but the story has taken on that aspect. Leighton did say, "If they're discriminating against face tattoos, what else are they discriminating against."

The answer, Eric, is criminal activity. Even a sports-bar is entitled to have certain standards. If you have the right to get a facial tattoo, others have a right to choose not to interact with you. Your right should not negate the right of another.  The restaurant is not to blame in this situation.  Blame the thugs and criminals who get their faces tattooed, who commit crimes that give businesses reason to be concerned, and as a result continue to sully the reputation of the tattoo community at large.

I will say it again, as I have said on other posts of this nature; think before you ink. You have to take the good with the bad. If you are not willing to accept that your choice may not be appreciated by others, and cannot handle the potential negative consequences, then maybe it is a choice you should avoid.